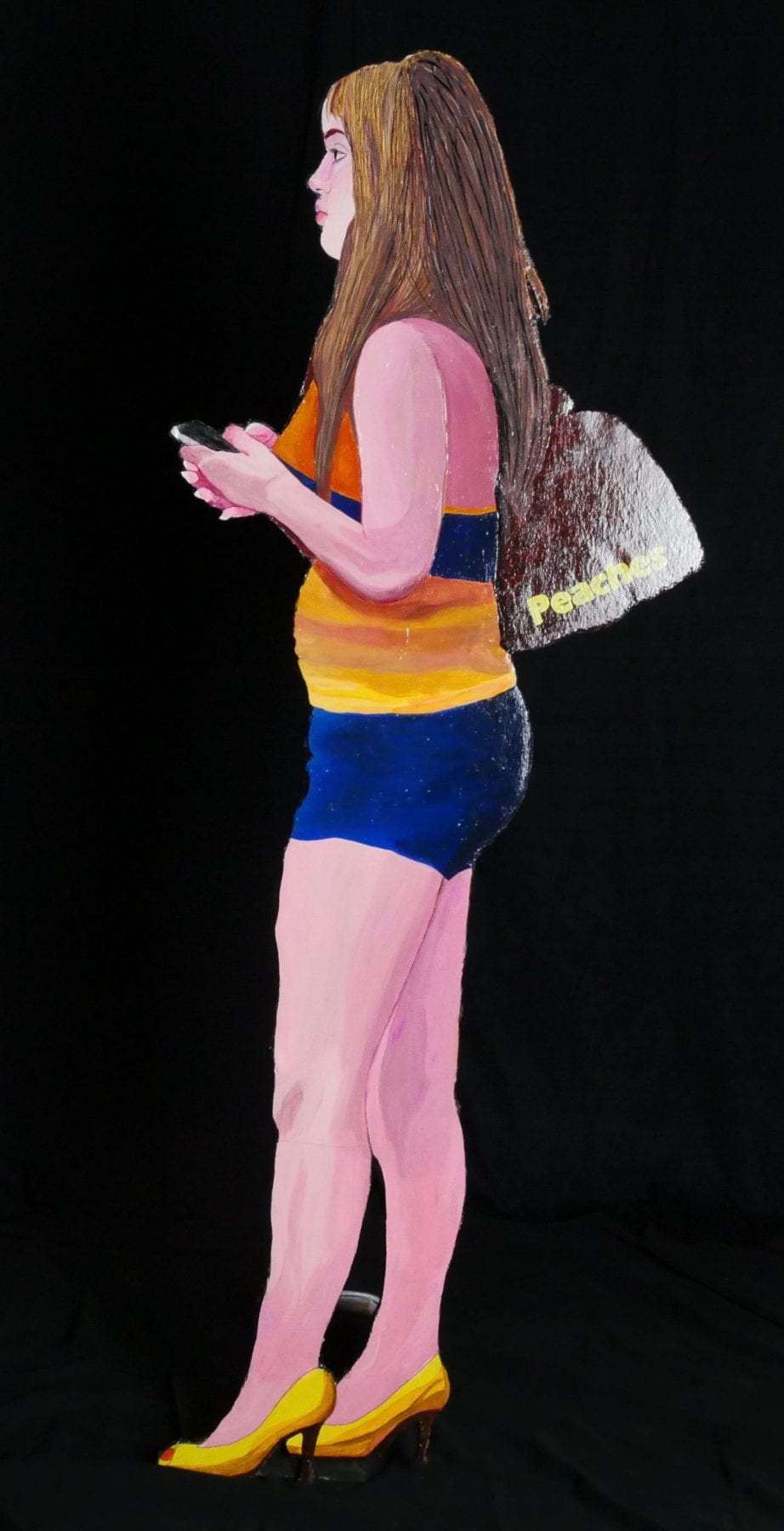 Peaches had a life that was not pretty, unremarkable. She was born into a home without love. In fact, it was abusive, for as long as she can remember. This family was not close. It was distant. There were siblings, brothers and sisters. They were close, at times, but those memories fade to nothingness. Constant violence in the home took hers and those of her siblings’ young smiles and virtual childhoods. At fourteen, Peaches left home. She ran away. She picked a time and day when she knew her parents would be “in another world”, a state of weekend drunkenness and incoherence. It was a day of sleepy heat during the summer. She did her research. She knew the way to the bus station. She had money, for the trip and to live on for a short while. She knew where she wanted to go, and she knew how much it would cost her. At least in monetary terms. She was headed to the largest city in the Central Valley.

Peaches was tall for her age. She did not look fifteen. She had all her personal belongings in two carry-on bags. She had her world around her…clothes, toiletries, makeup, her journal, a couple books from the school library, pictures of siblings, head phones, and a stuffed animal, a penguin. That’s all she knew. That’s all she thought she needed. Settled on the bus, she drew her carry-on bags around her and slept. The trip was a long one. Sleep was her way out of stressful situations, with her parents, at school, relationships. She would just put her head down, and sleep, thinking that when she opened her eyes, everything would be okay. The bus ride took about four hours. It went by fast. The black lady next to her with purple hair and makeup tried to make conversation. She was a sweet lady. She said she was a Christian woman, and she took an interest in Peaches. She had a way of asking questions, but didn’t seem too intrusive, though Peaches had to do some fast thinking to answer some of her questions, especially those about Peaches’ family life. The bus rolled into town. Right across the street was a hotel. The sign outside said it was for sheepherders. She needed a place to stay for a couple nights, to check things out. But that hotel was only for Basque people, though it had a restaurant and it looked like all the old men were gathering to go into the main room and eat. She asked the manager at the counter where the nearest hotel was, and he pointed just up the street. So, Peaches headed out to the Mayfair Inn. The guy at the counter looked at her funny when she asked for a room for a couple nights. He said they were very busy due to a big convention that was in town. The Inn was booked, but just a few minutes before someone cancelled. He gave her a key. Since she didn’t have a credit card, he took cash for one night. Peaches crashed the rest of the day. When she woke up, it was dark. She got up, changed her clothes and went outside for a walk. The parking lot was full of cars. She went back to the Inn and decided to hang out in the lobby. She saw lots of men in small groups. They were dressed nice and had badges with their first names printed large. She just took a seat on one of the couches and pulled out her phone. She knew once her parents figured out, she was gone, they would cancel her service, so she thought she would go out in the morning, first thing, and get a new service. She had several hundred dollars cash and knew one of her first priorities and expenses was to get a new phone. It was essential. While on her phone, she noticed the men would occasionally look over at her. She was practically the only girl in the lobby. One of the men came over to her and asked her if she would like to join the group for dinner. Their treat. He said there was a good Mexican restaurant right down the street and they would appreciate the company. They could walk. Peaches was hesitant, but the guy was insistent. He looked to be in his late twenties. He was nicely dressed, and Peaches was hungry. She hadn’t eaten all day due to the excitement of leaving. She said yes and the group of three men and her went down to the restaurant. They asked what her name was and when she said Peaches, they all chuckled. Their names were Jim, Rob, and Tab. They said they were in town for a three-day convention. The dinner was nice. Tab paid for the drinks. Peaches started with an iced tea, but Tab talked her into drinking a white Russian. Peaches liked the white Russian. She felt herself getting more and more comfortable with the three. At the end of the dinner, they all walked back to the Inn. They pulled up some chairs around the lounge and continued talking well into the night. Peaches was a little buzzed. Most of the conversation was about banking. The three guys worked in the banking industry and were attending an investment convention. It sounded like they had a lot of money. Every once in a while, they would include Peaches in the conversation, trying to bring her into the conversation. Peaches took a liking to Tab. He made sure he sat next to her at the restaurant, and then at the Inn.  When the other two went to the bar counter to get some more drinks, Tab asked Peaches if she would like to make some money. She responded she was looking for work. Tab asked if she would like to come to his room later, that he enjoyed her company, and that he would pay her for her time. She thought to herself, “What’s the harm? He’s cute. I like him. And it’s quick money.” After a long pause, she said yes. He slipped her his room card and gave her a time…12 midnight. Once in Tab’s room, he made her feel very comfortable. They rented a movie on the TV. He leaned in and kissed her. She responded, and the rest of the night was a blur. In the morning, she was awakened by the cleaning ladies talking and vacuuming down the hall. She looked next to her and Tab was gone. She got up, got dressed, and saw a note from Tab, with a hundred-dollar bill clipped to it. He said he had to go to the convention, and maybe would run into her later. Peaches collected her belongings, the note, and the money, then made her way to her room where she showered. She walked downtown and made sure she picked up a new phone.

That evening, she made her way to the lobby where she met up with Tab and his buddies. He said the three of them were going out again, to a casino, and asked Peaches to come along. The night turned out to be very strange. Tab suggested to Peaches that she “spend a little time” with Jim, his buddy from the convention. Peaches hesitated. That’s when Tab mentioned money, a lot of money. Over $300. That’s all it took along with a few drinks. They all went back to the Inn, and Peaches met up with Jim later that night. In the morning, there were three crisp one hundred-dollar bills on the table. The next day Peaches took a cab to the nearest mall and went shopping. This happened again that night, this time with Rob. Tab set it all up. It was the last night of the convention, and Peaches added another $100 to her rate. The next morning, Peaches met up with Tab, and that’s when he told her about having her come up to Alameda with him, and work with him in a side business. He was an investment person, making big money in Silicon Valley. He would set her up, in a nice apartment, as an escort for very wealthy clients.  This is when Peaches’ life took a dark turn. Tab slowly introduced her into the fast life as a professional escort, all at the age of sixteen. After several months the fast life took another turn, with law enforcement. One of her clients turned out to be an undercover homeland security person. He took her phone and found Tad’s number. They set Tab up in a sting operation. When he showed up, they arrested him and took his phone. His phone had all the incriminating information they needed…names, text messages, numbers.  As it turned out he was involved in an elaborate prostitution ring not only in Silicon Valley, but in Las Vegas and Reno. He had several girls, mostly under aged, but also other women facilitators who helped recruit women. Because Peaches was under aged, the authorities offered help for her to leave the industry.