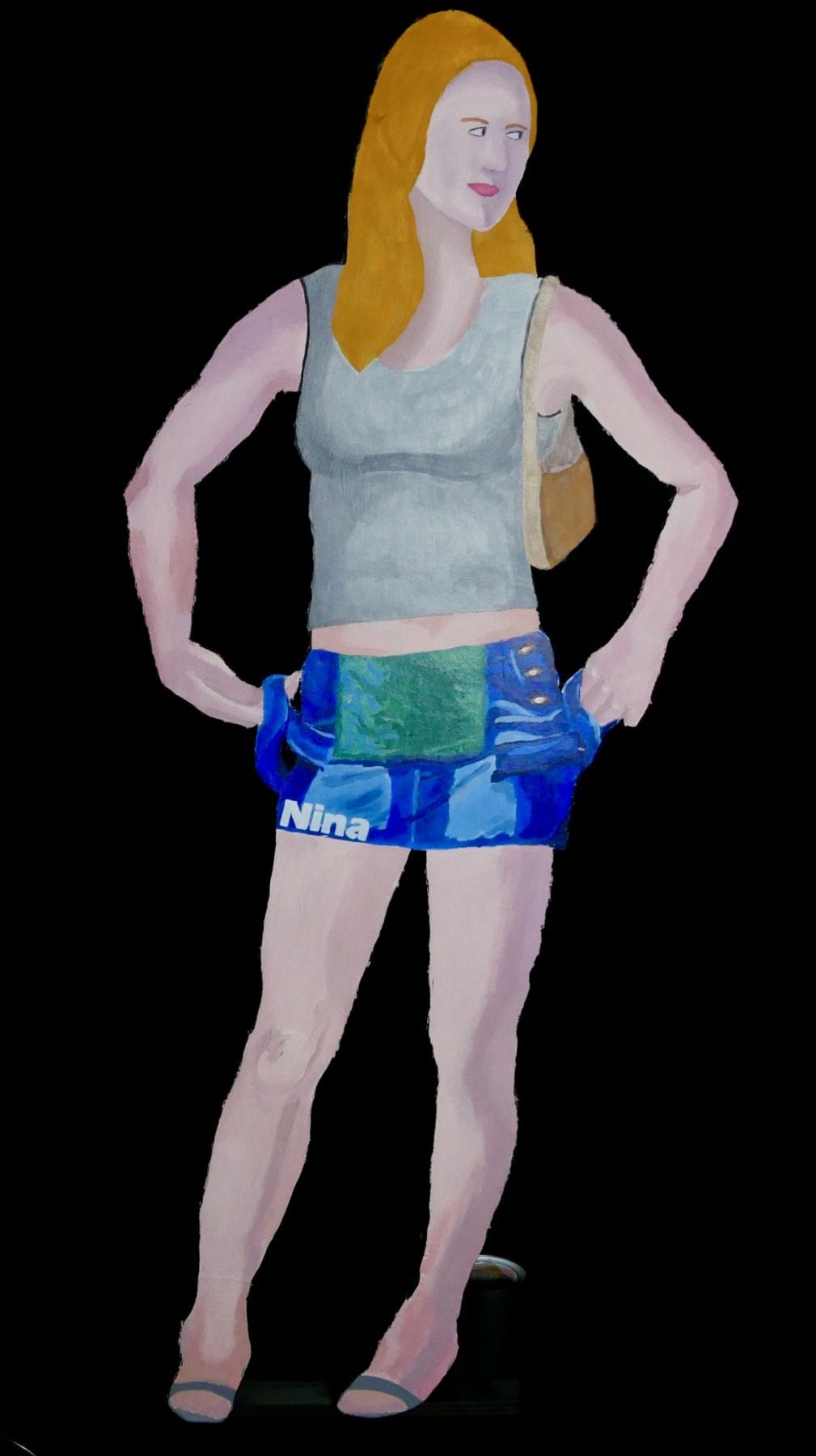 Nina started her trafficking story at the age of 15.

Nina comes from a lower class family with a bad background. Her father is an alcoholic. He is always busy with work and every time he comes home, he just sits and drinks his beers. He never seems to show interests in Nina. Her mother, on the other hand was loving and hard working. She kept the house looking like what a house should look like. Most of the time she was too busy to notice what went on in the house.

One day, Nina’s parent told her shocking and amazing news… Nina’s mother was pregnant. Nina was excited… but not as excited as her father was. It was going to be a boy.

Nina’s father always wanted a boy. He dreamed of playing catch outside with a son. Teaching him how to work things around the house. Show him how to be a “man.”

As the months went by… You could see the joy in her father’s eyes. They picked out a name for the baby… “Jeffrey.” He was so happy to have a son.

Unfortunately… the baby died a month later… due to pneumonia, a lung infection. Nina’s father was devastated. He was… angry…His way of coping with the loss was drinking. Instead of being the normal lazy drunk that he was… he became very abusive. He would get mad over little things that Nina would do wrong. He would hit and scream, telling her how useless she was. How she can never do anything right.

Nina spent a lot of her free time on the internet. She used the internet is an escape from reality. She would frequently post things about how she felt. Getting her feelings out there helped lessen the pain. She loved the way she connected to so many people anywhere around the world. Her escape from her sadness and depression was literally at the tip of her fingertips.

One day she posted about how her life sucks and that life was miserable because she had such a loser for a father. A person started to comment on her posts. He told Nina that he’d been through that exact same thing, and that everything will get better. As time went by, that person soon became Nina’s friend.

After almost six months, Nina learned a lot of information about this person. He said he was eighteen, (Nina was sixteen), had a job and a car. He lived out on his own, away from his “parents.” He also told her he lived fairly close to her, and that he was” there” for her. The internet bond, the connection was building. He made her smile. He was her “Safeplace” (someone who she can talk to, someone who listened).

One night, Nina heard her father beating her mother. He was so drunk he could barely stand. Nina always wondered why she didn’t just leave him, but deep down, she knew her mother loved him too much to leave.

Nina texted her friend how she was feeling. He told her she should leave, that it wasn’t safe for her there. Nina felt those words. Nina believed it was true. She believed she would be safer out on the streets than with her crazy drunk father and drug addicted mother. The man told Nina that he had a place she could crash at, until she could find something else. He told her that he had an extra room, food, and security. And whatever she wanted he would get it for her.

Nina couldn’t believe the offer. She felt a tremendous weight lift off her shoulders. She desperately needed to feel wanted, safe, cared for. Nina grabbed a few items and told him where to meet her. Nina ran away from home.

Once seated in his car, they tore off into the night. The street signs, roads, and buildings went from familiar to unfamiliar. They were passing places Nina didn’t recognize. Still, Nina was excited.

For almost two weeks, her friend, who she called Lucha, bought her lots of nice clothes, took her out to eat and other special places. Nina was as happy as she ever thought possible.

As the days turned into weeks, then a couple months, she could see things start to change. Lucha started to treat her differently. She was told that if she was going to live with him, she would have to contribute, help earn some money back. Nina was scared. She didn’t know how to earn money. She’s never had a job, but Lucha told her what she could do and how to do it. He controlled how she dressed, the wifi password, and when she could leave the house and with whom. Slowly, but surely, his web encircled her to where he had full control over every aspect of Nina’s life.

It was hard for Nina to get used to at first. Lucha told her how to act and how to talk to the customers, and what to do with them. She had to make close to $1500 a day or she would get a beating, in places where it didn’t show. Nina had to work from 8am-11pm 7 days a week.  She was told that if she loses any money, it’s her fault. If she gets raped in the streets, it’s her fault. If anything happens to her, it’s her fault. All this was intended for her to rely on him, to the point where she had no way out.

She remembers losing money and coming home with only $300, and the beating he gave her. He would use his open hand to slap her without leaving marks, but just as brutal. The pain was unreal. Then he would be loving to her, again, to build trust and dependence, then buy her things.

She lived her life under a man that only cared for himself. She wondered if her parents missed her, if they even noticed she was gone.

Nina regretted leaving her home as bad as it was., she was scared, isolated, in a situation she didn’t know how to get out of. She felt even more alone than ever. Nina thought about leaving Lucha every day, but she walked in fear. He was willing to beat her. She’s was scared of what he was capable of. She could see him killing her, and dumping her body is a remote place. The fear she felt was paralyzing.

Occasionally the man takes her shopping so she can get better looking clothes so she can earn more money. It’s the only time Nina can get something she wants. But nothing beats her wanting to go back home to her dysfunctional family.

It’s been a year, Nina is now 17, still working for Lucha. Nina feels tired. One day early in the morning, she heard some banging at the front door… a woman’s voice. Nina was scared and confused because no one ever visits, especially so early in the morning. Nina slowly walked to the door and looked through the peephole. She saw a female cop, with a host of other police behind her and in the street.

The cop yelled, “Open up! It’s the Police!” Nina froze, she was terrified.  All she was thinking about was, what Lucha would do to her if he found out she opened the door to the police? The cop said she had a warrant. She opened the door, and they pushed in, almost knocking Nina to the floor. They started asking a lot of questions. Nina did her best to answer. The cop told her that the man they wanted, Lucha Travois, was actually 27, had priors for fraud and other illegal activities, and that they had been watching him for some time. She said Nina was a victim, not a criminal. Nina told them where she knew Lucha was staying, and she realized this was her chance, a way out. She couldn’t believe it. She told the police she needed help. The police took her to the police station for further investigation and where they said they could get her some resources and help.

Nina told them everything he made her do, told them how he would threaten and beat her, and that she was so scared of him killing her. It’s only been a year, but Nina went through a lifetime of trauma. Nina was put in touch with some very special people, to rehabilitate her and help her deal with the trauma. They moved her to another city to keep her safe. She had to re-learn that she wasn’t useless, and not someone’s property. She learned about human trafficking and met others who went through what she did. She connected with others, and after a short while began to bond with advocates and begin to trust people again. She was not alone.

Before she could go meet her family, they made sure Nina was able to fend for herself, both financially and mentally.

After six months, and after the trial of Lucha, Nina was taken to her home town for an arranged visit with her parents. She found out her father died in a car accident. Nina was worried for her mother. She discovered that her mother missed her so much and was trying to make a break from her addiction.

After another six months, Nina went to live with her mother to help her overcome her addiction.