As a country with a history of immigration, the United States, over the centuries, has hosted refugees from all corners of the globe. In our family histories, many of us find references to genocide, famine, war, and religious intolerance. One of the latest waves of immigrants, the Southeast Asians, is no different. Finding their way into mainstream America, Hmong, Laotians, Cambodians, and Vietnamese have shared their presence with us through their family farms and urban gardens, pho and sticky rice, embroidered handiwork, cultural dance, and Asian markets. Children of immigrant parents have embraced our educational system, attained college and graduate degrees then contributed professionally in many of our Central Valley communities and beyond.

Born out of Vida en las Sombras, a McLane ArtVenture project illustrating the journey of undocumented immigrants from Mexico and Central America to the United States, Stories of Home: The Southeast Asian Story Project gives voice to another group of “undocumented” living in the United States: the refugee immigrants of Southeast Asia. This interdisciplinary project is the direct result of several Hmong students who, while working on the Vida project, voiced a desire to tell their own family stories. Thus began a collaborative effort between English and Art teachers who initiated their own research into the Southeast Asian experience by reading Kao Kalia Yang’s memoir, The Latehomecomer.

In Fall 2012, students in academy English classes began to learn about the Southeast Asian experience by reading portions of Yang’s memoir in addition to stories, poetry, and informative text. They viewed videos showing historical footage as well as interviews of those who had experienced the Secret War. Students then interviewed a Southeast Asian staff, community, family member, or friend regarding their experiences. A Speakers’ Bureau was established which brought guest speakers to McLane’s campus, including Yang, to share their stories and perspectives on the Southeast Asian experience. After multiple experiences with history, stories, and the culture, students engaged in creative writing through vignettes, poetry, and short stories which focused on the five time periods categorizing, specifically, the Hmong experience: Life in China, Life in the Mountains, Life in the Jungle, Life in the Refugee Camps, and Life in the United States.

During the Spring and Fall semesters of 2013, student artists worked diligently to translate student interviews and creative writing into forty panels of paintings, a graphic novel, an anthology, film, and a variety of other art work, some of which won awards at the Fresno Fair. The art work on panels is mixed media, combining painting, collage, assemblage, applique, acrylic, spray paint, oil paint, and stencils. Students worked both individually and in groups on various panels. Smaller works are also on display. Because so many of the stories written by students made reference to the Mekong River, student artists built a boat with life-sized people escaping to Thailand.  Sculpted hands protrude out of the tableau symbolizing those lost in the river and those reaching for a new life.

Engaging approximately 700 McLane students over a 16 month period of time, Stories of Home: The Southeast Asian Story Project debuts at Fresno’s Hmong International New Year, 2013. During this project, many Southeast Asian students gave voice to stories that had never been documented before while Latino, African American, and Caucasian populations discovered stories and histories they knew nothing about. As this project travels from Fresno’s Hmong New Year to other venues around the valley, art academy teachers hope to further validate McLane art academy students, especially the Southeast Asian community, who continue to often find themselves caught in between cultures and struggling to find a new sense of “home”.

Students interviewed and wrote stories from family and friends that immigrated to the U.S. during the mid- 1970’s. These stories were brought to the art department and students

selected stories they wanted to create. Art students spent an entire semester experimenting with a variety of media in preparation for their final 4 x 4 foot paintings. Students worked solo or in groups. The square format was selected to reflect the Asian way of telling stories, which is more circular. Students selected the images they wanted to depict in their final artwork. There were approximately fifty finished paintings. A life-size sculpture of people in a boat and hands extending out of the water were also created because so many of the stories dealt with the Mekong River. Large murals were created to reflect the Stories of Home timeline…The Peaceful Life in the Mountains of Laos, the Secret War, The Waiting Period: Life in Thailand, and Life in America. 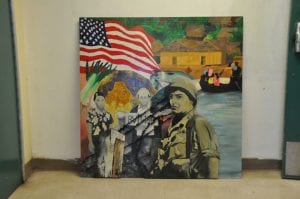 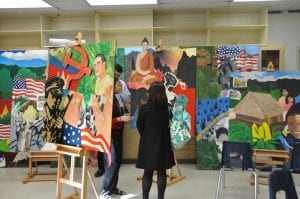 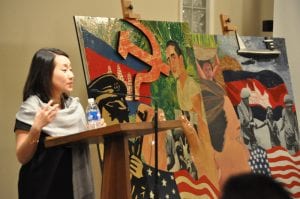 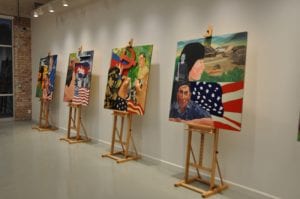 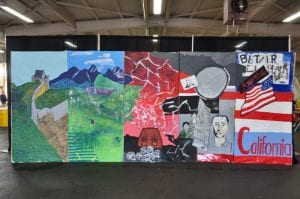 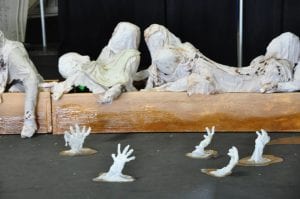 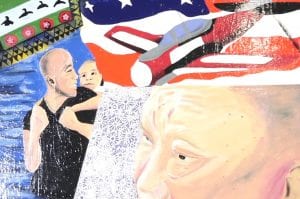 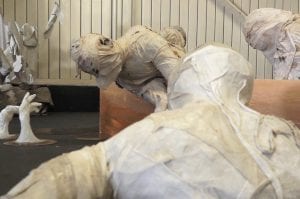 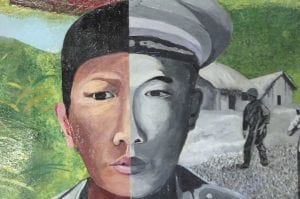 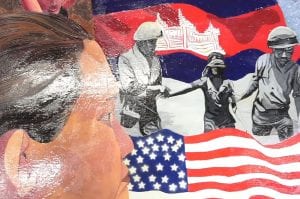 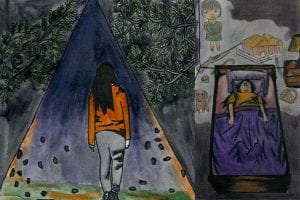 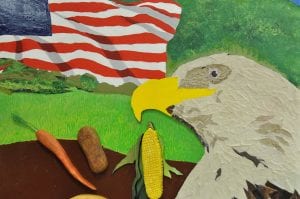 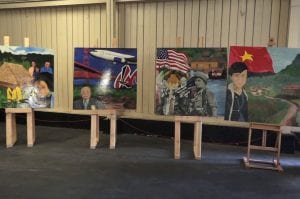 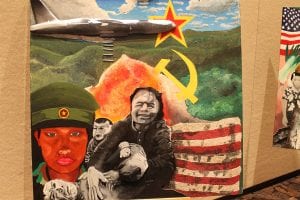